A Brush with MLM - Part Two

If you read my previous post, A Brush with MLM - Part One, you will know how willing I am to go along with somebody's sales spiel even if I have no interest in what they are peddling. Does this give them false hope? Or are they just used to it? I think my main problem is that if I'm in a one-on-one situation with said peddler, I am very unlikely to be politely firm (heaven forbid I'm ever rude to anyone) and say "no, thank you." After my most recent experience, however, I feel that forewarned is forearmed and I hope I can end the encounter quickly if it ever happens again.

I was in Albertson's grocery store earlier this week with my two children. As we're still in the throes of COVID-19 here in Orange County, we were fully masked up and keeping out of everyone else's way. We were in the snacks aisle when it happened. As I was deciding between party size or family size wavy Lays chips (if you're in the UK and reading this, it's a large or very large single bag of ridged Walker's ready salted crisps), a youngish couple with a small baby went past. The man stopped further up the aisle and asked me what the age difference between my children was because they were "trying to work out when would be good for another," indicating his very young baby. It did flash through my mind that this was a slightly odd question as when my daughter was the same age as his son, I was in no way trying to gauge the best time to have another baby. Anyway, starved for conversation that I have been during this quarantine, I was happy to shoot the breeze for a couple of minutes, talking about how my kids get on etc. Hey, I'm a mother, I don't mind talking about my offspring. His wife complimented me on my accent and said she was Dutch although, as there was no trace of an accent from her, I suspect that it might have been one of those instances where her family might have come from the Netherlands three or four generations previously. My son was hanging on my arm, trying to drag me off and my daughter was asking when we could go but there was no sense of urgency from them, they were happy to just stand about and chat. After a few more minutes of them asking generally about my situation and what my husband did etc., and with my son almost yanking my arm off, I got a funny feeling (and it wasn't only in my arm). I had suddenly remembered my friend, who also happened to be English, telling me about two weird encounters she'd had at Target. She had ended up exchanging numbers with a couple of people who were very friendly towards her so we had both laughed and assumed she was being groomed for some sort of sex cult. I will say that given I was with two young children, it did occur to me that this was unlikely to be a sex cult initiation test  but hey, one can dream. Maybe the couple sensed that I had (finally) twigged that their questions might not be genuinely about how I was doing in my life but I managed to get in a "well, I'd better be off," and we all parted merrily. As we trundled away, I told my kids under my breath that I thought I had just managed to escape from a weird religious cult. They didn't care, they just wanted to go home and my daughter pointed out very loudly and correctly that the woman's mask had been below her nose the entire time.
As we made our way to the frozen food section, I was horrified to see the woman (Cheryl) rushing back towards us, baby bouncing in her front carrier. "I just wanted to say - I thought we had such a great connection, even knowing you for only a few minutes, I just felt that I couldn't let you go without telling you about this wonderful opportunity..." at this point, I was out. I mean, she literally ran back for a second attempt after I had said things like "I'm not exactly a go-getter" before I was even on to them! She then started going on about a mentor couple that they had who had helped them so much and now they were both at home, not needing to work and would I be interested in an opportunity like that?
Me in my own head: Nope
Me out loud: What kind of thing do you mean?
She was then so vague about what these mentors did and what she and her husband did that it seemed pointless trying to find out any more. I managed to screw up what little gumption I own and said "I'm not really looking  for anything right now and if I was, I'd be more comfortable in a secure kind of traditional job." She looked a bit sad but again we escaped without even giving out a phone number. Phew! I kept a weather eye out for them as we grabbed our milk and ice cream. Seriously, if they'd come back again I was prepared to maybe start getting a little bit irritated. When I got home, I searched online for "friendly stranger recruiting" and made my way through a few reddit posts (like this and this) about how this had been my first experience with Amway, one of the OG MLM companies. Again, as with my first post, I was floored by how this was just an entirely scripted conversation and it didn't really matter what responses I gave, they were going to plough ahead anyway. I feel that their targeting went pretty awry with me (I mean whose idea was it to talk to a mother with her two young kids with her? Madness!) but having read about the pressures of having to recruit more and more people to keep your superiors satisfied, I can't really blame them. I just hope they weren't doing it out of desperation. But then isn't any business that requires you to approach complete strangers in the wild in the hopes of tricking them into finding out more about your mysterious business totally desperate?
I went on to Amway.com to find out more about the company. Here's the answer to the first question on their site, highlighting by me: 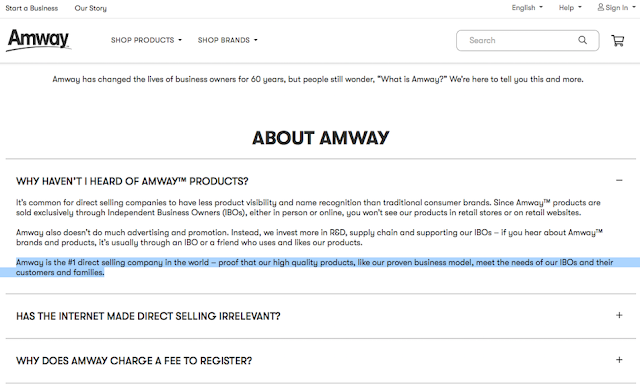 But if you are number one, why do you need to trick people into working for you? Why all the weird mystery about financial mentors? If it worked, wouldn't people be signing up in droves? It seems strange that although there is a reason given for why people haven't heard of Amway, that there is so little public awareness of them or their products. Back when I was growing up in England in the 80s and 90s, everyone had heard of "the Avon lady" or Tupperware parties etc. and that was before the internet! So there must be something else going on. Religion, probably. Search further down on the Amway questions page and you come to the "myths" section which basically brings up all the questions people have about Amway. I'm thinking that if they have a whole section devoted to this, there must be something to it! 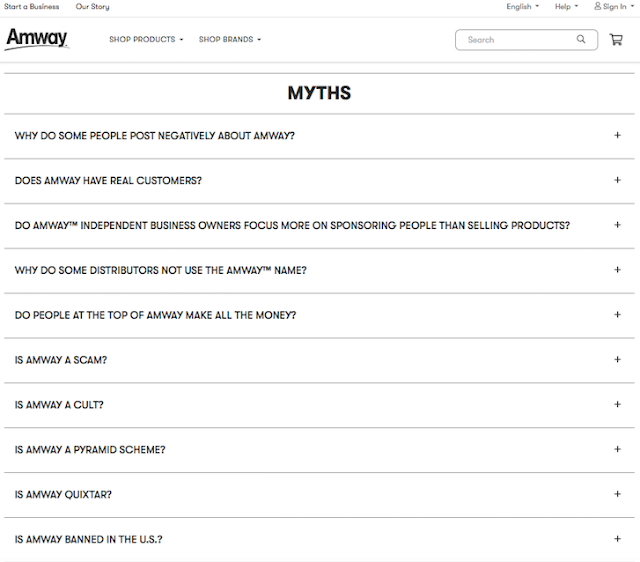 This is not a usual part of most company's FAQ section.
One of the founders of Amway was Richard DeVos, billionaire father-in-law of Betsy DeVos and ardent Republican party supporter. He donated millions to conservative causes which is not where I would want any of the hard earned dollars I might make ending up.
So the next time a stranger says they like your bag / shoes / glasses, it's probably safest to kick them in the shins, scream "NO, THANK YOU!" and run away.

July 20, 2020
Somewhere in the dim and distant past, probably about 3 months ago (remember then? March 2020? The month that never seemed to end and now seems like a million years ago?), it was becoming clear that in order to re-enter into society in any meaningful way, you needed to be in possession of some sort of facial covering. A mask, in other words. Of course, as is my wont, by the time I started realizing this, all the fecking masks were long gone. You could get stuff on Amazon, but it seemed to be the equivalent of a piece of toilet paper with two elastic bands on the ends for the princely sum of $500 for a set of 5. Late one night, I decided to get into a bit of a panic so literally googled "where can I buy masks". As it turned out, there were several places and my first mask purchase came from trendy LA scenesters, Monogram . I got a pack of 4 washable jersey masks for $43.10 including postage in a week or so. At first I was relieved, then annoyed with myself as they were too big
Post a Comment
Read more