A Brush with MLM - Part One

Have you heard of "resting bitch face"? It means that when you're not actively pulling ker-azy expressions, you look like you're in a bad mood and kind of mean. Even if you're not. Well, I seem to have "resting sucker face". Yes, I am that one born every minute. I guess I'm just too nice and polite to say "no, thank you!" (it seems so easy just typing it out like that. And "no, thank you!" is also a very nice and polite way of telling someone to fuck off and I can't even do that). It's been a curse since I was young. I remember listening to a long telephone sales pitch about the benefits of a special women's health insurance and agreeing that it did sound great and I was very interested but did it matter if I was only 14? Fast forward a couple of years and my mum had to tell the Jehovah's Witnesses who popped around for a return visit that I'd suddenly gone to University in Manchester. Now in the States I've picked my habit back up. There seem to be more in-person cold callers / doorsteppers here than there were in England but maybe it's just because I am usually at home now. I now try and limit my interaction with the dreaded door knockers by just not answering the door anymore but in the past two years I have:

I guess that's not so bad for two years. At least I didn't buy about 15 pounds of semi-suspicious fish from a stranger who just turned up at the door with it like my mum did.
So, having set the scene for my general crapness and pliability, here's the story of my first brush with MLM. If you don't know, or can't be bothered to take 2 seconds to Google it, MLM stands for Multilevel Marketing or when you get suckered into joining a company and have to shell out a lot of money to stay in it and the only way you can make any money back is by selling their wares to your friends and family and trying to recruit more people to do the same for you. They are basically pyramid schemes but as there are goods being sold, they are legal. I think. It is very hard to make a decent amount of money this way. Sure, some people do it, some people do very well indeed but I know I would not be one of these people.

I met Claire (not her real name) through the MOMS Club I was in at the time. While she only came to one meet up, we saw each other by chance in a playground shortly afterwards and got chatting. She said she worked for herself and was doing really well and it was great, she could do as little or as much as she wanted, blah blah blah. I was politely interested (to be honest, she had a degree in natural sciences which was much more interesting to me but she barely mentioned that at all) and said politely interested things like "oooh, that sounds good," "wow, go you," blah blah blah. We met up again for another play date and she wrinkled her nose like it was sort of embarrassing to ask and said "I work for Mary Kay, the makeup company? Do you think you could be one of my faces for the month? You could bring your son and we can set the boys up with snacks and tv?" Flattered, and thinking that I was doing my new pal a favor by getting her numbers up, I agreed.  I turned up at her apartment the next day and was faintly surprised to see her dressed up in a quaint Mary Kay smock and ready to give me the hard sell. Once our sons were dispatched to stare at her massive tv with a bowl of Goldfish crackers each, we began.
Claire had a flipchart presentation thing and I was greeted by a picture of who I initially thought was English drag act, Lily Savage but nope, it was MK founder, Mary Kay Ash. 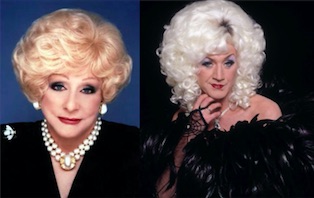 I mean, they could be sisters, right?
Claire then proceeded to espouse the main MK principle of "God first, family second, Mary Kay third."
Ummmmm. I felt weirded out. I don't believe in God so that automatically ruled me out of whatever Kool-Aid picnic this was. And if God does exist, I think He'd rather that you didn't spend your time trying to recruit vulnerable women into a cosmetics pyramid scheme. Just sayin'. If I had a tenet (which I don't really), my principle would be: "Family first, me second, job third." I didn't want to offend my friend by laughing at her so I nodded and smiled my way through the rest of the presentation about how Mary Kay worked. I don't remember anything about this apart from you got to attend "fun" conferences where everyone cheered and clapped (ugh) and you could get a pink Cadillac. Er, pass.
I was then asked on a scale of 1-10 with 1 being "no interest" and 10 being "sign me up!" of how interested I was in becoming a Mary Kay consultant. I was a rock solid negative 10 but, sap that I am, I tentatively said "three?" Claire then sold me a face wash and a cream eyeshadow which, to tell you the truth, I really liked, and asked how I wanted to pay. Now, as a stay-at-home-mum with no independent income, I don't have a lot to waste on sales-pressured cosmetics. Claire said I could pay by cash, card, or what she liked to call the "husband unawareness plan" *wink* which was "a little on this, a little on that". I laughed along. Stupid husbands! I did actually have enough on my card so didn't have to undermine the trust my husband has in me not to purchase random crap from almost-strangers. Well, that showed him.
Claire then followed up my visit with multiple calls, texts and videos trying to get me to join Mary Kay. She invited me to a meeting she was going to, offered to pick me up etc. but thankfully I had a genuine excuse and couldn't attend. Eventually I stopped answering her calls and ignored her sales texts. She only ever contacted me about Mary Kay stuff and I just wasn't interested. (Apart from that eyeshadow but it's been discontinued, ha!). I felt sad that I'd lost her as a friend but wasn't prepared to apologize for feigning a modicum of interest in becoming a Mary Kay consultant.
In the course of reading up about Mary Kay to write this post, I was absolutely gutted to find out that there had been no genuine interaction with her during the consultation at all, it was all scripted, down to the "husband unawareness plan" line! I felt even more like a fool but at least I had ghosted my way out of the clutches of an MLM behemoth.  I saw Claire at a Christmas fair this year, old-fashioned Mary Kay smock on, basket of cosmetics in hand. At the time I felt a little ashamed and avoided her. But now I don't feel so bad.
As it turned out, this was not my first encounter with a scripted MLM recruiter. Check out my next post to find out about my most recent awkward encounter!

July 20, 2020
Somewhere in the dim and distant past, probably about 3 months ago (remember then? March 2020? The month that never seemed to end and now seems like a million years ago?), it was becoming clear that in order to re-enter into society in any meaningful way, you needed to be in possession of some sort of facial covering. A mask, in other words. Of course, as is my wont, by the time I started realizing this, all the fecking masks were long gone. You could get stuff on Amazon, but it seemed to be the equivalent of a piece of toilet paper with two elastic bands on the ends for the princely sum of $500 for a set of 5. Late one night, I decided to get into a bit of a panic so literally googled "where can I buy masks". As it turned out, there were several places and my first mask purchase came from trendy LA scenesters, Monogram . I got a pack of 4 washable jersey masks for $43.10 including postage in a week or so. At first I was relieved, then annoyed with myself as they were too big
Post a Comment
Read more