July 20, 2020
Somewhere in the dim and distant past, probably about 3 months ago (remember then? March 2020? The month that never seemed to end and now seems like a million years ago?), it was becoming clear that in order to re-enter into society in any meaningful way, you needed to be in possession of some sort of facial covering. A mask, in other words. Of course, as is my wont, by the time I started realizing this, all the fecking masks were long gone. You could get stuff on Amazon, but it seemed to be the equivalent of a piece of toilet paper with two elastic bands on the ends for the princely sum of $500 for a set of 5. Late one night, I decided to get into a bit of a panic so literally googled "where can I buy masks". As it turned out, there were several places and my first mask purchase came from trendy LA scenesters, Monogram. I got a pack of 4 washable jersey masks for $43.10 including postage in a week or so. At first I was relieved, then annoyed with myself as they were too big for my two kids. Being handy with a needle (I thought. I only do cross-stitch kits), and wanting to save some money, I then decided to embark upon HOMEMADE masks.
The Homemade Mask Challenge
OK, the first thing I needed was some sort of material. I thought I had some cotton scraps left over from when I had somehow made two cushion covers over a decade ago but nope, they seemed to only exist in my wishful thinking. Then I found a pair of my son's too-small pajama bottoms. Bingo! I cut a leg off, bulkily sewed two hairbands to the ends and ta-da! He actually liked it and it could do in a pinch. Next, one for my daughter. Cut off the other pajama leg. Sew on hairbands in a bulky way. Ta-da again! Er, not quite. The hairbands around her ears hurt and she immediately complained that she couldn't breathe. I was getting tired of sewing stuff so turned to the internet again, searching for "no sew face masks". In no time I'd found Jennifer Maker and downloaded some printables on graph paper. The only thing is that our printer doesn't work. So I looked at them and they were all very specific measurements like 4 7/8" so I just freehanded a template, raided the outgrown clothes pile for a t-shirt and cut out a mask for my daughter. It was too small. Not deterred, I drew a slightly larger mask, raided the clothes pile again and cut out another mask. Again, too small. You'd think I'd have maybe measured it or something first but I thought I'd drawn it bigger!  Anyway, it was becoming clear that we didn't like these masks much as I'd have to sew the layers of fabric closed otherwise they started curling around the edges and these were supposed to be no-sew!
More Searching
Later on, a post caught my eye on that petri-dish of petty grievances and wildly differing senses of humor, Nextdoor. Someone had said they'd ordered disposable masks from UCI PPE and they had been good quality and affordable. I whizzed to the site (which no longer exists!) and ordered a 10 pack for $20 plus $10 postage. There was not much information on the site, I got no confirmation email so nervously waited and about 2 weeks later, the masks arrived. I made it clear to my husband that these were DISPOSABLE and only to be used IN CASE OF EMERGENCY and we should use the fabric ones first. He said they had masks at his work so not to worry. I put the package on a shelf and was annoyed when he took a mask out. I reminded him that these were to be used as a LAST RESORT. "Don't worry, we have them at work." So why are you taking mine?!??! A couple of weeks later I noticed I was down to 4 masks! They are now hidden in a secure location.
Another Lead
Now into April and still feeling antsy that my kids only had shoddy homemade bits of old clothes to protect them and others, I went on Etsy and after much searching, found Toy Story and sloth patterned masks with an option for a filter pocket from Pink Alligator Boutique. Including postage, this was $26.94. They arrived quickly and my kids loved them. The only problem was that my daughter's mask was a bit tight on her. I cut the elastic ear loops and lengthened them slightly and this made her happier. I was so impressed with the quality of these masks that I went back and ordered two more plain black adult-sized ones. Another $26.94 later and my collection was looking a little better. I was going to order more for the kids but because the adult size was too big and the kid size too small for my daughter, I decided to carry on looking. 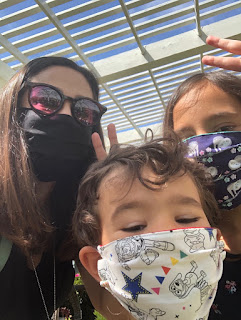 You may have noticed that by this point I have spent $126.98 on 18 masks. This sounds like a lot but is just over $7/masks so not as terrible as I first thought. Most of these are washable and even though more than half of my last-resort-disposables have vanished, I'm feeling OK about our mask sitch.
The Right Mask at the Right Price
May rolled around and I was lounging around in bed when a notification popped up on my phone. I had to check it twice - Old Navy are making masks! And they were $12.50 for a pack of 5!!!! All my prayers had been answered. I whizzed to the site and added a kid's 5-pack to my cart. Of course I needed to add more for free shipping so I bunged in a pair of trousers for my son. Oh no, the masks were out of stock already! I refreshed a few times and eventually managed to place an order. Phew. I sat back and then thought - what an idiot! They might need one every day at school! You should have ordered more! So I went back on the site and after a bit of refreshing and messing about, managed to snag another 5-pack for kids and also a 5-pack for adults. Because of the huge surge of interest, the delivery time was long but they eventually arrived and guess what? They are great! The elastic is soft and the masks are well made and most importantly, both my kids will wear them. 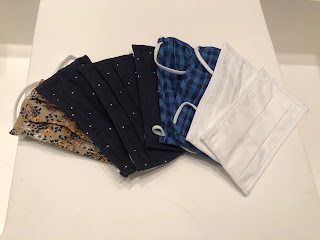 Of course, you can pick up masks all over the place now but I think we have enough for the time being. Although I am flirting with the idea of getting the ones that aren't pleated for the kids as they may feel less claustrophobic...